There comes a time when a project ought to come to an end. I think that this is the point that the re-creating Charles' Grant's ACW War Game may have come to.

It has been a fun journey with (I feel) quite a few "aha!" moments on the way, for me at least.

Recently put in some time re-reading Ross Mac's blog over the past few days, in particular his rules for a gridded ACW war game. Having a cold has it's unexpected benefits. Certainly I was prompted to dig out the collection and take a good look.

While I've not yet made any final decisions, I think it might be possible to discern the general direction of the breeze.

If nothing else, this would be an opportunity to paint up some fun subjects to round the army out in this direction rather more.

And it's all about the fun.

I've not decided whether permanently to draw a line under this blog and keep on at The Duchy of Alzheim, or simply to carry on as a more broadly ACW space. Time will tell.

For now, thanks for reading.
Posted by Old School ACW at 3:32 PM 1 comment:

I was idly flipping through my copy of "War games: Battles and Manoeuvreswith model soldiers" tonight when I came upon an interesting line at the end of Chapter 7, "Rules and Demonstration Battle: 'Action in the Plattville Valley'".

Featherstone was concluding the chapter with a paragraph on the sources of the figures used in the game. it will not surprise that the figures were mostle SAE, plastic Spencer Smiths and some Scrubys. What really got my antennae twitching was the mention of limbers from Ed Saunders. Is this the same Ed Saunders of Taunton who used to cast the lovely little 30mm WSS figure seen in this past year on eBay?

In a similar vein and from the same paragraph there are mention cannon by John Hatherway. Is this the same John "Hathaway" mentioned as a source of artillery in "The War Game Companion" that were used in Charles Grant's early ACW games in the later 1950s?

This one no less. It's been quite a while we've been idle here, is it not? Nine months if I have it right.

Little has happened, I fear to admit. I shall performa little stock-take and se what's to be done.

So what do we have? A workable set, no two sets if we count the "Easy-Peasy" rules. The Easy Peasey rules have had a few outings with my nephews Max and Oscar over the past eighteen months and seem to give a good enough game. Whether it resembles the ACW is another story!

I have a few terrain pieces, four units of Union and four of Confederate infantry, a battery each of guns for them and a Union cavalry regiment both mounted and dismounted. All these are painted which is to the good.

If memory serves, I think I have another Union cavalry regiment (in both mounted and dismounted formats) in bare metal, as well as various other field guns. I think there are other odds and sods of infantry as well kindly sent to me by Clive.

I am currently eyeing off some of the RAFM ACW siege and fortress artillery. And the Thoroughbred 1/600 ironclads. Very tasty.

I have played Sawmill village and a few more  impromptu games using the Easy Peasy rules.

So what's next? More cavalry I think. Perhaps get those field guns done. Buy a unit of Zouaves?

UPDATE: Ok, i've started the Field Guns. There are three Parrots and a Rodman.
Posted by Old School ACW at 9:06 PM 1 comment:

Updated the Firing rules with a major revision courtesy of Charge!.
Posted by Old School ACW at 9:16 PM No comments:

Tha Shape of Things to Come 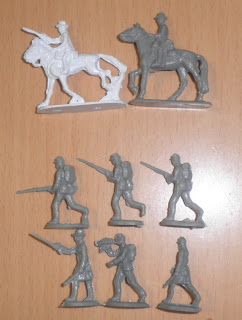 I had a little win on eBay a couple of weeks ago that yielded a few of these plastic Spencer Smith chaps. This has led on to other things...
Posted by Old School ACW at 3:40 PM 4 comments:

The Fight at Sawmill Village 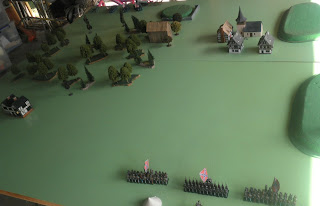 It's a fine Spring day somewhere in North America, sometime in 1861. War has broken out between the Union and the Confederacy and Generals Guildenstern and Pender have each declared their loyalties for their respective camps. Each has a Division short of a regiment and a gun at their disposal. Both have been ordered to sieze the Sawmill Village that lies astride the Great North-South artery, the Reservoir Road. As can be seen, from the daguerrotype above (doubtless taken from the basket of a daring ballonist) the field is of the simplest - the eponymous Village, the Sawmill, the Wood, the Old Dover House and, of course, the dispositions of the contending Parties. 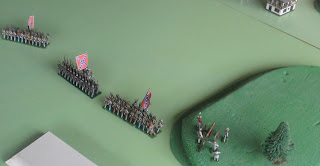 Not lacking in Dash, Penders' brigade and a half advances in accordance with orders. The Alabama Volunteers peel off to the left to mask the woods, whilst the Texas Infantry and the 6th VA along with the half-battery advance, the former directly upon the village, the latter to the northernmost edge of Twin Peaks in order to dominate the village. 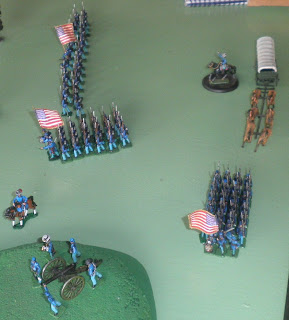 The Union Regiments in obedience to their instructions from Gen'l Guildenstern form up in column, the 6th US Infantry southing it around Sandy Hill, whilst the Maine Regiment norths it. The gun mounts. 18th West Virginia goes into open order preparatory to entering the Wood. 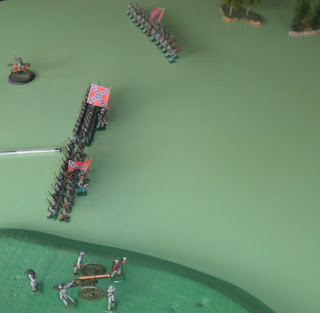 Sigh. The advance continues from the Confederate side. 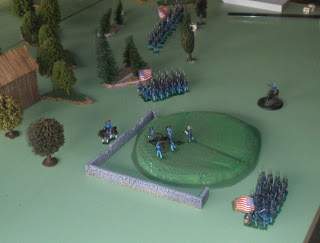 Ditto from the Union side. NOTE: I was considering double moves from here to speed matters along!
﻿﻿﻿﻿

.
Move the third - the Alabama Vols enter the wood, note that they have decided skirmish order is best. 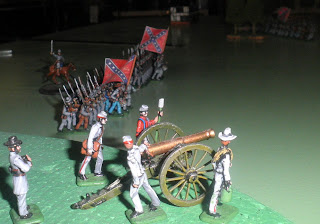 The Confederate gun can just draw a line of sight to the 6th US Infantry and fires at long range. The shot goes astray. The Union gun replies with a shot at the Texians, taking down one man.
The infantry in the woods open upon each other at long range the Maine Regiment suffering 5 casualties and the Alabama Volunteers three in reply.
﻿﻿﻿﻿﻿﻿﻿
﻿﻿﻿﻿﻿﻿The Colonel of the Maine Regiment decides to charge the enemy, but his men, perhaps a little rattled by their casualties refuse. The Confederates counter-charge. the Maine boys manage to stand it but - oh, at what a cost!
They suffer 17 casualties to the Alabamians 5 and are forced to retreat, being well-and-truly below half strength. 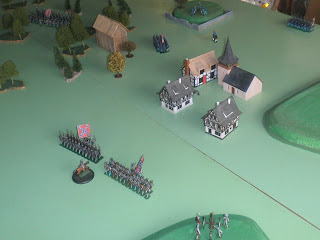 On the other side of that gory field the advance continues. The Union Artillery shave another pair of casualties from the Texians whilst the Confederate gunners perhaps should have spent less time in the saloon and more on the firing range. 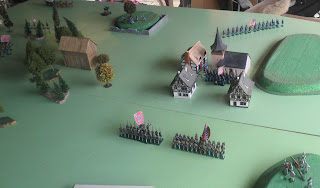 On the fifth move, the 6th US Infantry occupy the village and prepare to hold out. 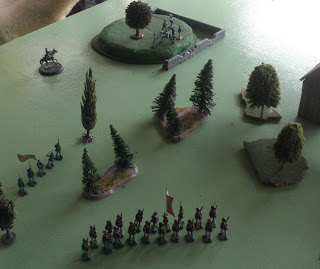 Meanwhile the Union Gunners realise their peril. Rattled, they swing their gun about and fire an ineffective shot off against the advancing Alabama Volunteers. 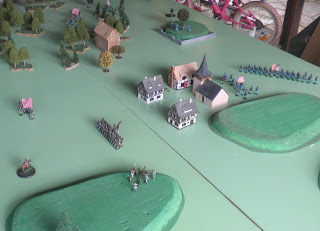 A furious exchange of musketry around the Village smashes the Texans - 16 casualties are suffered in return for four inflicted and they reel back in panicked flight. Sadly though, the 6th US Infantry suffer a further 11 casualties from the 6th Virginia and the Rebel Gun and are themselves forced to retire.
﻿
﻿ There comes a point in a battle where a commander must decide whether to persist with his endeavour - in the hope that he might win through against the odds and all good sense -  or to discontinue with a useless effusion of blood. Guildenstern wisely decided that with only one regiment in "fightable" condition, he might do better to withdraw, save what could be salved and retreat with dignity rather than risk a rout. His army could lose only a further four figures before reaching break point (50% of the Army's figure strength) whilst Pender was comfortable in the knowlege he retained 61 of the 88 men he started the battle with.
Posted by Old School ACW at 3:54 PM 13 comments:

Herewith the latest addition, a Union Cavalry regiment. Another in preparation.

In other news, I fought out most of "Sawmill Village" today. Battle report to follow.

Next I intend to fight out the "Defence of Citadel Heights".

Both scenarios sourced from Mil Mod, October 1987.
Posted by Old School ACW at 3:33 AM 5 comments: